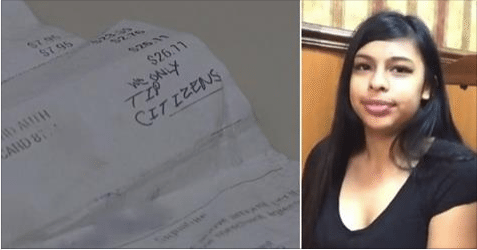 A waitress in Virginia was horrified recently after serving a couple who she says left her a racist message instead of a tip.

“We only tip citizens,” read a message where the tip was supposed to go on a receipt after Sadie Elledge says she served the man and woman at Jess’ Lunch in downtown Harrisonburg, Virginia.

“It shouldn’t even matter, I just feel like it’s rude and disrespectful. I’ve never met, I’ve never done anything to them,” Elledge told WHSV.

However, Elledge said the customers behaved unusually before they left the message.

“They wouldn’t talk to me. They would just nod their heads,” she said.

Elledge, meanwhile, is an American citizen. While she claims both Mexican and Honduran heritage, she was born in the United States.

Confounding her even more, Elledge said the female half of the couple had some sort of accent, herself.

As news of the nasty note spread in Harrisonburg — nicknamed “the Friendly City” — neighboring business owners got together to console Elledge with a real tip plus a little extra for her troubles.

In that same neighborly vein, Elledge said she’d even happily serve the couple again. “It makes me the stronger person to not let these things bother me,” she told WHSV.

3-year-old fatally shot himself while playing with gun