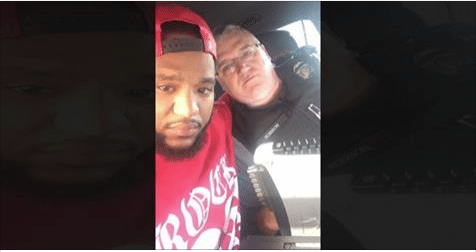 The call came in the wee hours of Sunday.

At 3 a.m., Mark Ross learned his 15-year-old sister had just been killed in a car wreck. Stunned and shocked, and without a car, he convinced someone he knew to drive him from Indiana to Detroit.

It was a risky proposition. The man had a suspended driver’s license, but Ross begged him. They were speeding down an Ohio highway when, sure enough, they were pulled over by the state highway patrol.

Ross also had an outstanding misdemeanor warrant. But instead of going to jail, he ended up being driven more than 100 miles by Sgt. David Robison, who prayed over him and delivered him to a Detroit coffee shop where Ross’s cousin came to get him.

“It was just so overwhelming,” Ross told InsideEdition.com Monday.  “They were trying to help us.”

It was completely unlike several recently publicized encounters between a young African-American man and a white cop.

His friend “ended up getting locked up,” Ross said. “They were trying to get me as close to Detroit as possible,” he added. Michigan’s Wayne County, which had issued the warrant, didn’t want to send someone to get him.

So Robison, out of the kindness of his heart, drove him to a Detroit restaurant.

“Everyone knows how much I dislike cops,” Ross wrote on his Facebook page, where a photo he shared of him Sgt. Robison has been shared more than 48,000 times.  “He gave me hope,” Bass wrote of the law enforcement good Samaritan.

As Ross was getting out Robison’s patrol car in Detroit, the cop leaned over and asked “if he could pray over me,” Ross recounted. “It was so overwhelming it kind of took me away from my own reality.

His family, he said, is eternally grateful for Robison’s generosity of spirit. They have invited him to the young girl’s services.

Young Boy Gives Homeless Man the Shoes Off His Feet