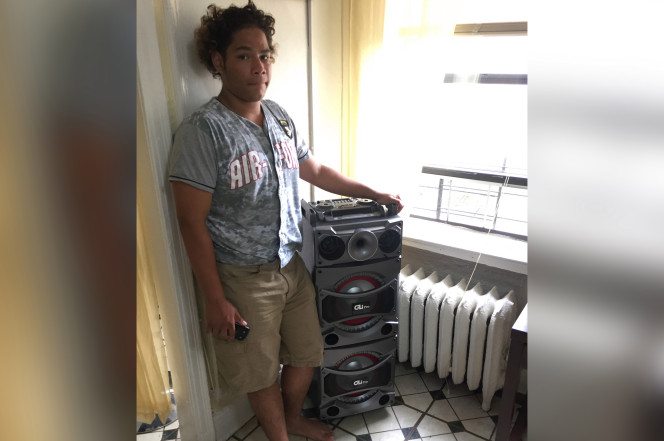 A Bronx teen defiantly blasted the NWA song “F— Tha Police” out his third-floor apartment window Tuesday as thousands of cops were gathered below to mourn slain cop Miosotis Familia — prompting a house call from about 20 officers.

The young man, who identified himself as Julien Rodriguez, 16, said it was “satisfying” to play the song on repeat from his apartment on East 188 Street, claiming that his older brother and best friend were unjustifiably killed by cops.

“Since they did not show respect for my brother and my friend, why should I show respect to them?” the teen told The Post.

About 20 officers went up to the apartment to try to halt the music, with one cop speaking to the teen in Spanish about his own time growing up as a Latino in the city, law-enforcement sources said.

The teen told The Post that he eventually apologized to the cops — but only because the building super threatened to toss his family out of their home if he didn’t.

“I apologized because it was between the house and apologizing,” he said.

Cops at the funeral were infuriated by the show of disrespect.

“This is the s–t we face every day,” a police source griped.

The teen gave The Post the names of his brother and friend who he said were killed by officers, but the paper could not find any record of their deaths.

Meanwhile, the teen admitted that while he hates cops, he feels bad for Officer Familia, who was executed by police-hater Alexander Bonds while she sat in a mobile command vehicle nearby early July 5.

“I feel sympathy for that, because all she was trying to do was take bad people off the street,” the teen said. “It was wrong because she did not do anything wrong but at the same time, my bro and my best friend died for no reason.”

A man who identified himself as the apartment’s owner later claimed he was going to give the kids the boot over their show of disrespect.

“I left my job, came to the apartment, and told them they have to get out of there,” said the man, who only gave the name Jesus and said he had been allowing the siblings to stay there for the week. “I’ve got a deep respect for all the police — I didn’t know they would do something like that.”

Woman Arrested For Training Squirrels To Bite Off Ex-boyfriends Testicle

Man accused of robbing bank to get enough to open account