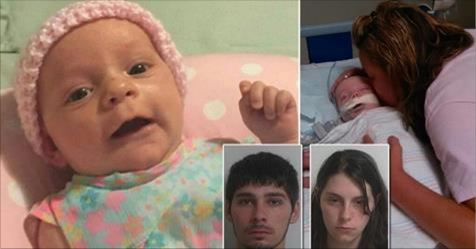 The Georgia parents accused of brutally beating their infant daughter were allowed a final visit before she is removed from life support, authorities said.

On Monday, three months after her alleged beating, was taken off life support. The baby’s parents were allowed 30 minutes to say goodbye.

Her father, Justin Whited, has been charged with aggravated battery and cruelty to children. The girl’s mother, Jamie Cason Whited, is charged with child cruelty for not doing enough to protect her child, prosecutors said.

The parents have pleaded not guilty.

The decision to remove Dinah from life support was not swift. Justin Whited initially objected to the move in court last week.

However, a video of the totally unresponsive baby at the hearing reportedly brought the father to tears, at which point he finally agreed to the termination of life support.

Leading up to the decision, doctors tried and failed to convince Mr. Whited to take Dinah off life support in several phone calls, according to a GoFundMe page created to offset Dinah’s funeral costs.

In his order, Walton County Juvenile Court Judge David Dickinson allowed the couple to see the child and remain with her until she died. He said he made the decision because both parents agreed to terminate life support and because neither has been convicted of harming her.

Jamie and Justin Whited are being held without bail at the Walton County Jail.

Thieves may have saved dog’s life while stealing laptop

Is ‘hot’ 4th grade teacher causing a distraction in the classroom?