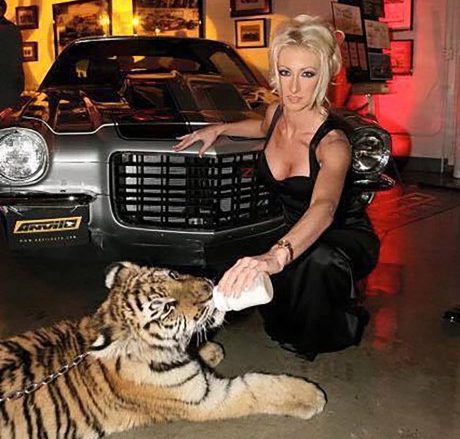 The job became more appealing to her when an adult film agent told her she could make $30,000 a month, and soon after, she did her first sex scene at a Malibu house.

“I remember after the scene, I sat in the shower for about two hours crying. Then I stopped after that shoot and didn’t go back for about one month,” she told Barcroft.

“I ended up going back to it again and that’s when I was numbing myself through taking pain medicine and drinking alcohol to get through the scene.”

“It just became like this daily routine for me where I would drop my son off to school in the morning, go do a shoot and come home. It was like a regular 9-to-5 job,” she said.

“I just lived for myself and my son and didn’t really think about the consequences of making films and dancing and everything,” said Bassette, adding that she became “recognized everywhere.”

A turning point came for Bassette, a sexual abuse victim, in May 2014 after she got into a serious car crash and was charged with DWI.

She attended her sister’s church, where she met her future husband, David, the pastor.

“He’d known about my past for years because my sister was going to his church,” said Bassette, who married David, 26, in December 2014. They have a son together.

She said, “The day I was saved, I felt like the preacher was just speaking to me directly. It was like he was preaching to only me and you know that day I felt God was talking to me through his preaching and everything he said felt right.”

Soon after marrying David, the two founded their own church called New Beginnings Christian Life, where they hope to inspire others.

As for regrets, Bassette said she has none.

“My past made me who I am today and God has changed my life completely,” she said.

2-Year-Old Caught on Video Crying as She Tries to Wake Up Overdosed Mom at...

Chinese Woman Strips Naked At A Mall After Ex-Husband Tells Her He Bought Her...