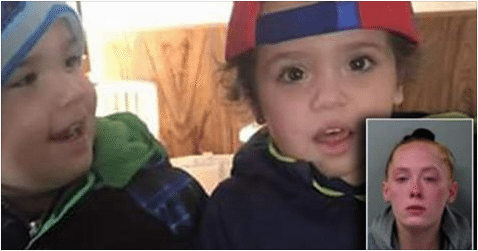 A New York woman was arrested in connection to the deaths of her twin 2-year-old sons, who died in a mysterious fire after being left home alone, authorities said.

In the hour and a half that Heather Ace, 25, was away from her Batavia home on May 20, a fire broke out inside or near her twin boys’ first floor bedroom, officials said.

That blaze proved lethal, as Michael and Micah Gard died of smoke inhalation, authorities said. Their bodies were found inside their room.

The cause of the fire has yet to be determined.

Ace’s landlord reportedly had plans to evict Ace before the fire erupted, telling the television station he did not like the amount of “traffic coming and going” from the home.

The homeowner has since demolished the house, which suffered extensive damage in the fire.

Ace was charged with two counts of endangering the welfare of a child.

Officials noted that she was not accused of taking direct action to cause the children’s death.

“She is not charged with either setting the fire or otherwise being directly responsible for their death,” Genesee County District Attorney Lawrence Friedman told WIVB-TV. “She is charged with acting in a manner that is likely to be injurious to their well-being.”

Ace is expected in court on October 3.

Jim Carrey saddened that his late girlfriend Cathriona White’s autopsy was released: ‘What a...

Groom Cancels Wedding After They Sent Him A Video Of The Bride at Bachelorette...

Engaged Teacher Bangs Student After He Wrote His Snapchat On Test