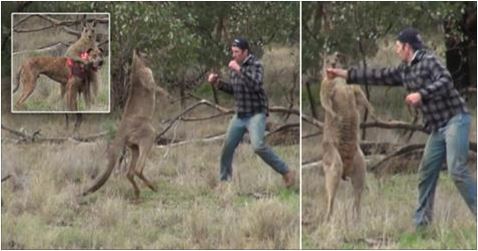 Nobody messes with this man’s best friend — not even this kangaroo that appeared to be ready for a fight.

During a hunting trip to the Australian Outback over the summer, a man spotted a kangaroo holding one of his dogs in a chokehold before he jumped out of a moving car, and dashed toward the animals.

Suddenly, the kangaroo pops up, releases the pooch, and puffs up his chest as the two alpha males square off.

In an instant, the man swings at the kangaroo with a powerful right hook, knocking the marsupial back, and stunning the beast before it hops off into the woods.

Fuming, but unharmed, the man rounded up his two dogs before heading the other way.

“A kangaroo kick to the guts could easily disembowel the owner,” Greg Bloom, the man who took the video, wrote in a statement to ViralHog. “The punch stops the roo and makes him think about the situation.”

Bloom explained the man had originally wanted to make sure neither the kangaroo or his dog was hurt, but when the kangaroo appeared to keep coming toward the man, he decided to protect himself and throw the first punch.

The man, later identified as Greig Tonkins, is reportedly an elephant keeper at the Taronga Western Plains Zoo in Dubbo, New South Wales. The zoo believes Tonkins took “appropriate action” against the marsupial, according to a statement from the facility.

“We laughed at the absurdity of the situation and at how unfortunate it was for the dog and kangaroo,” Bloom wrote.

He went on to explain the entire outing came to be when a teen with a rare bone cancer wanted to catch a 220-pound wild boar with his dogs as a final wish.

Kailem Barwick, who passed away last week at the age of 19, was diagnosed with the Ewing sarcoma in 2014. He was told he beat the cancer after nearly a yearlong battle, but it returned in January 2016.

A group of hunters came together to help make his final wish come true when they discovered he was terminal earlier this year. The dogs, which were actually highly trained in hunting, had caught the scent of a pig before they got in the way of the pugnacious kangaroo.

Barwick was also married to his longtime sweetheart, Brandi-Lee, in a hospital ceremony just days before he died.

Although Bloom wrote they never intended the wholesome trip to turn violent, “this hunt is part of the treasured memories his friends and family had.”

Pokemon Go Player Climbs Cemetery Tree, Has To Call 911 After Getting Stuck