At one point, during the bizarre ordeal, one stripper seductively drapes her body over the coffin in front of the dead man’s relatives.

The bizarre trend of women being paid to strip off and dance at funerals is on the rise in China and Taiwan – and it’s worrying the authorities.

The phenomenon has become such a problem that the Government has become involved to put a stop to the practice.

The disturbing scene caught in this footage, at the funeral of a man named only as Mr Jian, sees the women perform a ‘sexy dance routine’ to the Maroon 5 hit Moves Like Jagger.

The women, dressed in lingerie and knee-high leather boots, gave the deceased man his ‘final gift’.

The entire routine was carried out while a picture of the deceased was illuminated in the background.

A Chinese stripper even takes off her bra at one moment during the funeral – with children reportedly in the audience. 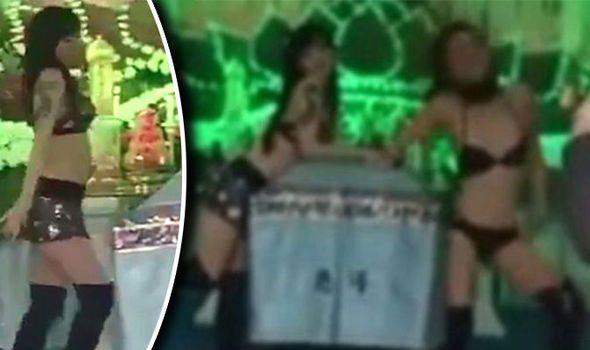 The size and extravagance of the ceremony is often interpreted as a status symbol in the country.

Mr Jian allegedly hoped the strippers would attract more mourners to the event.

However, the recent tradition faces a struggle to survive as authorities crack down on the trend.

They say the practice distorted the “cultural value of the entertainment business” and such acts were “uncivilised”.

In some cases, the organisers and performers involved were punished by officials in the country.

Last year, investigators fined one set of organisers £7,600 after a funeral they were involved in featured a team of six strippers. 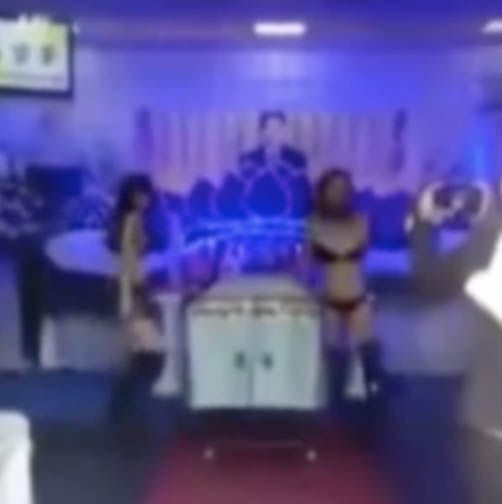 According to LiveLeak, a friend of his said: “He told his friends he wanted a hole to be dug in his coffin, and have the girls dance in front of him.

“That way, he could watch the dance through the hole.”

Man punched 4-month-old daughter to death to stop her ‘baby talking’ while he watched...

FOOTAGE RELEASED OF THREE TIGERS MAULING A MAN TO DEATH AFTER HE CLIMBS INTO...