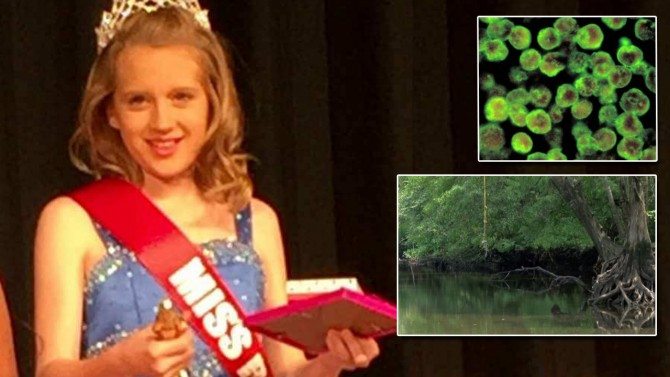 A South Carolina girl has died after contracting a brain-eating amoeba while swimming in a river.

Hannah Collins, 11, was pronounced dead Friday, just three days after health authorities said a Naegleria fowleri infection — the second in the Carolinas this year — had been confirmed.

Officials didn’t identify Hannah, but said they believed the patient had been exposed to the single-celled organism while swimming in the Edisto River in Charleston County on July 24.

Hannah’s father told WCSC that he’d taken his family to the river for a day of swimming, where Hannah repeatedly jumped into the river from a rope swing.

Present in warm, fresh water, the amoeba can cause the unusually fatal amebic meningoencephalitis when it enters the body through the nose.

The father, Jeff Collins, was also tragically unable to be at Hannah’s side in her final days after he said he was arrested and held behind bars for unpaid child support.

However, Collins was taken by jail personnel to the hospital on Thursday. She died the next night.

“I was able to lay next to her,” Collins said.

A judge has since allowed Collins’ release following Hannah’s death. He may now attend her funeral services.

Collins said his daughter lived with him part-time. While living with him in Colleton County, Collins said Hannah was named the Rice Festival Princess.

Earlier this summer, an Ohio teen died after authorities believe she was exposed to Naegleria fowleri while rafting in North Carolina with her church.