“It was a dark time in my life when I needed to support myself. And I had no other way to pay my rent. So it’s not something I’m proud of. And I really don’t want it to define me or my career or anything.”

The 27-year-old buxom beauty has admitted to performing sexual favors for NYPD Deputy Inspector James Grant and Det. Michael Milici aboard a private plane to Las Vegas in January 2013.

The trip was organized by Brooklyn businessman Jeremy Reichberg, identified as a key player in a far-reaching federal bribery scandal that has rocked the NYPD.

Grecko appeared in lower Manhattan Friday dressed to impress in a black mini-skirt, leopard-print heels and thigh-high stockings embroidered with a subtle message — “whip me, bite me, eat me, tease me.”

The red-haired siren refused to answer questions about her trip to Sin City with the cops and businessmen — and insisted that she no longer works as a call girl. 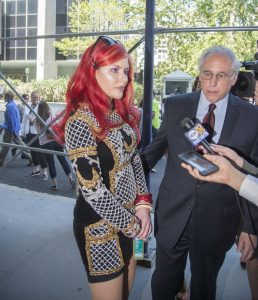 Grecko’s lawyer Robert Baum said she has been focused on “moving on with her life.”

“It’s something she wants to put behind her, and never look back again,” Baum said. “She’s now an actress. She’s a model. And because the incident involves her as a witness in a pending criminal matter, we do not believe it’s appropriate to discuss the substance of what her testimony will be.”

Reichberg and Grant, along with Deputy Chief Michael Harrington were among those arrested Monday as part of the scheme.

Milici was fired by the NYPD but has — so far — avoided criminal charges.

Police Commissioner Bill Bratton declined Friday to comment on the conduct of Grant and Milici. “I don’t have anything to say about that,” Bratton said, noting that the pair are the subjects of an ongoing investigation. 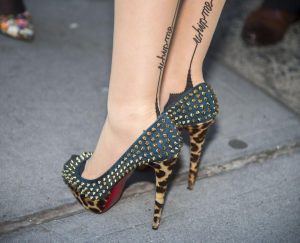 Manhattan U.S. Attorney Preet Bharara, who is coordinating the probe, has said the cops acted as a “private police force” in exchange for gifts, bribes and perks worth more than $100,000.

Reichberg and his pals in the Hasidic community in Borough Park received favors such as police escorts, assistance with private disputes, free security at religious sites, fixed tickets and special access to parades and other cultural events, the complaint said.

Reichberg and his friends received, in effect, “cops on call,” Bharara said Monday.

GUY MISSING HALF HIS SKULL CHARGED WITH ARSON AND ATTEMPTED MURDER, MOST WTF MUGSHOT...