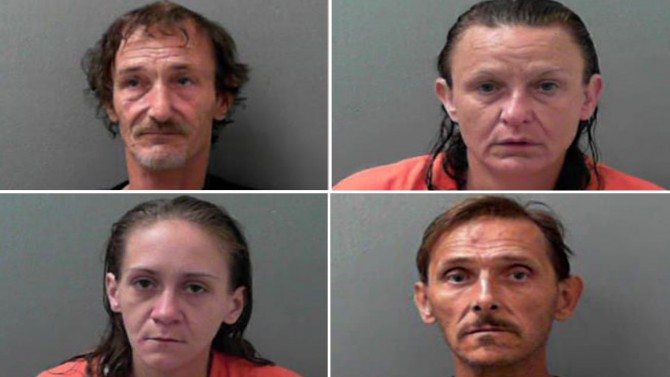 Four people were arrested after they were allegedly found shooting up heroin in a parked car along a West Virginia highway while a 1-year-old baby was left soaked in his own urine in the backseat, authorities said.

State troopers responding to a drug complaint outside a fast food restaurant on U.S. 60 in Huntington allegedly found 56-year-old William Ernest Smith, Sr., behind the wheel of a Toyota RAV4 with a needle stuck in his arm at about 8 p.m. Friday, the Herald-Dispatch reported.

The three other adults — identified as Gregory Allen Smith, 54, Peggy Veronica Smith, 46, and Heather Lynn Bledsoe, 27 — were found conscious, but troopers said they had a hard time getting their attention, even with the vehicle’s windows rolled down.

“They were so out of it, it didn’t hit them that there was a trooper standing right there,” Trooper J.A. Roach told the Herald-Dispatch.

A 1-year-old boy was found in the back seat soaked from his waist down in his own urine, authorities said. A puddle of urine had also formed in the child’s car seat, police said.

Bledsoe was identified as the toddler’s mother.

About a dozen needles, capped and uncapped, and a crack pipe were found in the vehicle and on the adults, cops said. Smith, Sr., was allegedly found carrying heroin as well, police allege.

A small dog was also found unharmed inside the car.

The little boy was placed under the care of Child Protective Services. Animal control took the dog.

The four adults, all of Branchland, West Virginia, were charged with child neglect creating risk of injury, the Herald-Dispatch reported.

Peggy Smith and Bledsoe allegedly told troopers they had traveled from Lincoln County to purchase heroin in Huntington.

Pervert Sets His Sights On Little Girl In Target. When He Throws Himself On...

Girl Gets Shocked in the Face with Her Own Taser during Fight, Then Gets...

THE INVENTOR OF VIAGRA JUST CAME OUT WITH A SPRAY THAT CAN HELP YOU...