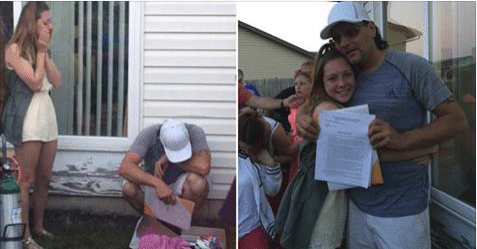 Graduation marks the end of a chapter, but for one 18-year-old who asked to be adopted, it was only the beginning of a new era.

Last weekend, Lauren Hernandez from Illinois invited friends and family to her Plainfield home for a party in celebration of her graduation from high school.

Breaking from tradition, Lauren presented her mom’s boyfriend of 17 years, Joe Iosco, a present of her own.

As Iosco opened the box, he was disappointed to find towels.

Then, he discovers a heartfelt poem at the bottom of the box, describing the relationship between a father and a daughter.

Finally, he digs deeper into the box and discovers an envelope, containing official adoption papers so he can legally become Lauren’s father.

“He was shocked,” Lauren’s mom, Sally Hernandez told InsideEdition.com. “This meant the world to him, and it’s almost like his wish had come true.”

Hernandez told InsideEdition.com that the family has been talking about Lauren’s adoption for years.

Adoption was nearly impossible when Lauren was younger because her biological dad had visitation rights, but Hernandez said she started looking into adult adoption just months before Lauren’s 18th birthday in April.

The mother-and-daughter duo kept Iosco in the dark as they did further research and met with laywers.

“Everything was simple, but we made it more difficult than it needed to be,” Hernandez joked.

Eventually, they found a lawyer who drew up the papers to be presented to Iosco, seen in Hernandez’s video collapsing to the ground when he was overcome by emotion.

Despite all the fuss, “We know papers don’t mean anything,” said Hernandez.

She told InsideEdition.com that since her daughter was a year old, Iosco has been playing father to her daughter—which meant even more to Lauren since he didn’t have to.

“When you have kids of your own, you automatically love them. He wasn’t there for Lauren’s birth, but he’s loved her the same way he loves our little girls,” Hernandez said. “He chose to stay. He chose to stick around.”

For years, she said Iosco lived up to his responsibilities as a father, including paying her Catholic school tuition, and taking her on family vacations.

Even though the papers are just a formality, “for her, it makes it official,” Hernandez said.

Passengers get into fistfight aboard Los Angeles-bound flight, video shows

Homeowner says 19 vehicles have crashed into his house since 1960